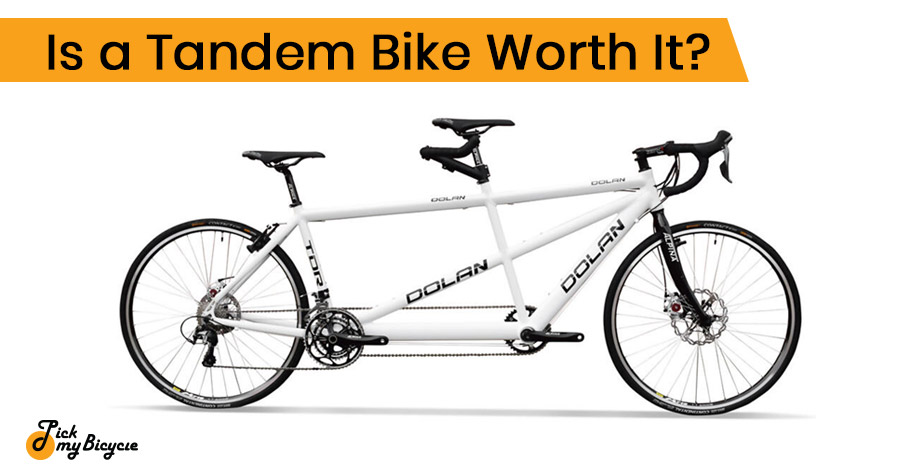 Everything You Need to Know About Tandem Bikes

If you are searching for the type of cycle that can be ridden by more than one person at a time but are unable to find pieces of information about them, you are at the right destination.

Our expert team has put together every slice of information to quench your thirst for tandem bikes. By the end of this article, you will possess a thorough knowledge of the history, parts, and a few interesting facts about tandem bikes.

Everything You Need To Know About Tandem Bikes

What Is A Tandem Bike?

A tandem bicycle is a structure of bicycle that is exclusively constructed to be ridden by more than one person. It allows more than one person to pedal the bicycle. Most common tandem bikes are for the count of two to four. Tandem cycles for more than four persons also exist but they are not predominantly found except in a few places. Tandem cycles were present in the mid-eighties war period and they were predominantly used in the second Anglo-Boer war. A tandem bike that can be ridden by two persons was built by Mikael Pedersen. Later, he dedicated his time to inventing a tandem bike that had the capacity to be ridden by four riders. Tandem cycling sport was also made a part of the modern games as early as 1896 in Athens. Riders took part in it actively and it also attracted a majority of viewers in the Olympics. Mechanism Of A Tandem Bike

A tandem bicycle is built in a way that the cranks of the bike are mechanically connected by a timing chain that allows the pedals to turn simultaneously. The person riding the bicycle has to communicate in a good way with the rest of the riders to propel the bike forward. The mechanism is the same even if there is an increase in the count of riders.

Technique To Ride A Tandem Bike

Tandem bike needs a great deal of concentration. The captain needs the good skill of communication and should be attentive at all times while riding. Meanwhile, it is not mandatory that the person deciding to be the captain for a tandem ride need not be big built. The strength is all that is needed to make the move.

Parts Of A Tandem Bike

Tandem bikes are usually equipped with high-pressure tires, and stronger wheels with a higher spoke count as the wheel has to have the potential and ability to handle the stress and weight of two or more persons. The spoke count is numbered between 32 to 48 spokes depending on the weights of the individuals who are riding the tandem bike. A rim that is usually made of heavy-duty materials is preferred.

Working on the handlebar is much more demanding in a tandem bike when compared to a normal bike because the rider has to handle and balance the body movements of self and the second rider. Handlebars are usually designed in a structure that allows the rider to make adjustments easily along with a balance.

A fork dedicated entirely to a tandem bike is most appropriate for the effective performance of the bike. A normal fork will not serve the purpose as the brake forces are not substantial. The majority of tandem bikes were built using steel forks. But steel tandem forks were heavy. This was replaced by carbon forks that offered a great sense of comfort. Carbon forks also have the potential to handle heats that are generated while riding long distances

Tandem bikes are a great option for uphill and mountain biking. People who are riding to enjoy nature and who are seeking to have fun with friends and family along with an adventure element to it can try their hands on tandem cycling. The power of two or three people will help to move the bike faster and will drain lesser energy when compared to normal road biking

Tandem bikes are one effective way to commute as they can carry two persons in a single vehicle. This will save space and time and will reduce congestion

It is one of the fun things to do with kids. They will enjoy the experience of riding a tandem bike as it may be something new and refreshing

How To Shop A Tandem Bike?

Tandem bikes are rare in most bicycle stores. If you are looking for investing in a tandem bike, make sure you contact a reliable retailer. Ensure to book a test ride before the actual purchase. It is also highly recommended to take a person from your family or friends to assist you with the test ride. Riding two to three variants before settling down for one is a wise decision.

Tandem bikes are one of the fun ways to travel around the world. Be it with friends or family, tandem bikes can be chosen if you are taking a nature trail. Now that you know everything about a tandem bike, confidently invest in it and start exploring. Hope our article has served its purpose.

If you have any questions regarding the same, feel free to contact us. Our experts are here round the clock to furnish you with solutions to all of your queries regarding the article.